The Company’s primary gold licence area lies in a geological region referred to as the Longford–Down Massif. Exploration work by the Company within the Massif has resulted in the discovery of a 40 mile gold trend. A series of major gold targets have been identified along this trend. These include Clontibret and Glenish in County Monaghan, Clay Lake in County Armagh and Slieve Glah in County Cavan.

The region has an established mining tradition. Over twenty lead mines were operated during the 19th Century in what was referred to as the South Armagh – Monaghan Mining District. A copper mine was worked at Tullydonnell in County Armagh and an antimony mine at Clontibret, County Monaghan.

The antimony mine shafts were dewatered in the 1950’s and back channel samples assayed leading to the first discovery of gold in the area with grades of up to 34.98 g/t recorded. Subsequent drilling in the vicinity of the antimony mine tested positive for gold but the assessment of grade was hampered by poor recovery. Modern drilling techniques employed by Conroy Gold resulted in good recovery with grades comparable to those recorded in the back channel samples. An extensive exploration programme in the region was then instituted by the Company which led to the discovery of the 40 mile gold trend and the series of other gold targets in addition to Clontibret.

The Longford–Down Massif is a geological region which trends north-easterly from County Longford in the Republic of Ireland to County Down in Northern Ireland. The Massif is intersected by a major fault, the Orlock Bridge Fault. This major fault marks a very pronounced stratigraphic discontinuity. To the south of the fault are Mid Ordovician to possible early Silurian greywackes composed of andesitic detritus material, whereas to the north Ordovician argillaceous sediments occur. 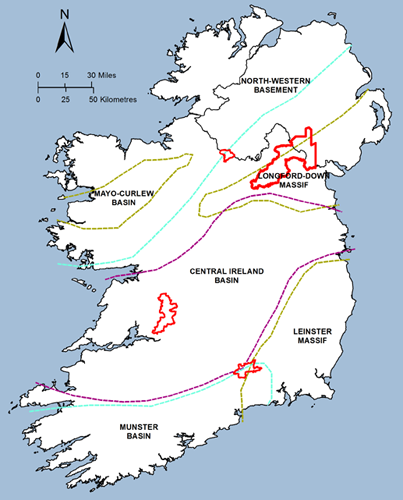 The Longford-Down Massif and other Irish major terrains with Conroy Gold licence areas.

These greywackes are of sandstone grain size and individual beds vary from a few centimetres to a few metres thick with a large proportion of rock fragments within a fine-grained matrix. They are interbedded with siltstones and argillites. The oldest rocks are of Caradoc-Ashgill age, which form a NE-SW trending strip on the northern boundary of the Longford-Down Massif. North of the Orlock Bridge Fault, the Ordovician rocks are comprised of greywackes and shales resting on agglomerates and spilites. South of the Orlock Bridge Fault, Silurian (up to Upper Llandovery) greywackes and siltstones dominate, with a few inliers of Upper Ordovician black mudstones and shales. 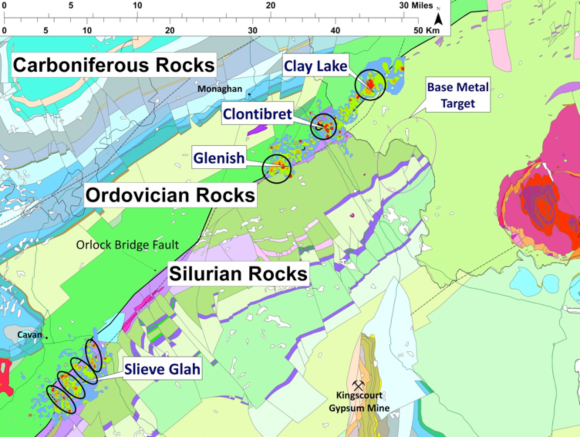 Detailed geology of the 40 mile gold trend in the Longford-Down Massif.

The Longford‐Down Massif is believed to represent a Caledonian age sedimentary package that formed along the northwest side of the Iapetus Ocean. It is thought to be the accretionary prism (obducted sediments) of continental slope, trench and ocean floor sediments generated by a north northwest directed subduction. An alternative marginal ocean basin interpretation has also been proposed. The northwest volcanic arc is represented by lower Ordovician volcanics stretching from counties Mayo to Tyrone (Tyrone Igneous Complex). The Orlock Bridge Fault, which can be seen in both Ireland and Scotland, is thought to represent a deep seated structure (Steed and Morris, 1986).

The Iapetus Suture Zone is a tectonic boundary resulting from the collision between Laurentia and Avalonia during the early-Devonian closure of the Iapetus Ocean some 400 M years ago. It is expressed in the Southern Uplands of Scotland, across the islands of Ireland and Newfoundland and into the Appalachians of North America (Rao et al, 2007).

The Company believes the geology and structural setting of the Longford-down massif is conducive to the formation of major gold mineral deposits.