Ireland has a great deal to offer the exploration and mining community and continuously ranks highly in the Fraser Institute’s mining survey. The benefits include the following:

Both the Irish government (Republic of Ireland) and the government of Northern Ireland have placed a firm emphasis, as a high priority, on encouraging exploration and the responsible development of mineral resources.

Mr. John Browne TD, Minister of State for the Dept. of Communications, Marine and Natural Resources (Republic of Ireland)

Common elements of government policy in both the Republic of Ireland and Northern Ireland include proactive support of departmental agencies and the encouragement of free enterprise.

Prospecting licenses both in the Republic of Ireland and in Northern Ireland give the holder the right to explore for specific minerals and the exclusive right to seek mining facilities. There is security of tenure and straightforward environmental guidelines.

Logistically, exploration across Ireland is a relatively easy task. Ireland has good road access to all areas and a temperate climate ensuring work can be conducted across the country all year round.

Ireland has several international airports across the country in (with direct routes to Europe and North America). Ireland is also served by deep water ports providing ease of access to international markets, a rail network undergoing extensive modernisation and an excellent road network. Ireland's telecommunications network rivals that of its European neighbours with continual upgrades ensuring reliable high-speed links to the rest of the world. 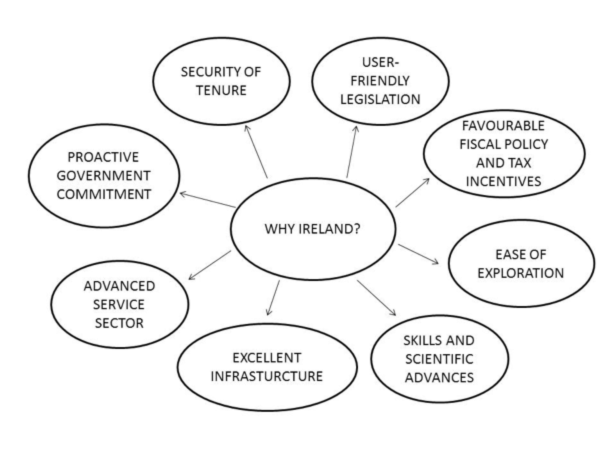 Summary of the Benefits for Exploration and Mining in Ireland